Wow. I mean, Brrr. Tennessee sure knows how to make it cold. I mean, Obama isn't even in office yet and he already seems to have cured Global Warming. (I'm just kidding with that link there.)

So, Michael and I flew into Nashvile on Thursday night. On Friday, we drove over to Knoxvile, and played a concert in a town called Jefferson City, hosted by our friend Luke. (His mother makes good food, by the way.) Had a great time with those folks, then drove back over to Music City, gaining back the lost hour on the way.

Saturday, we had--get this--the day off. I spent the day reading about Episcopal Church history, and Michael went and saw one of the sessions at the 3rd of 3 National Youthworkers Conventions, hosted by our friends at Youth Specialties. Then we had a lovely dinner with friends. Then we hooked up with our pals Alathea, who happened to be in town doing some kind of music-type meeting with some kind of music type people; we didn't want to ask. However, we did ask them to pose by a very scary picture of Billy Graham, right there in downtown Nashvile. 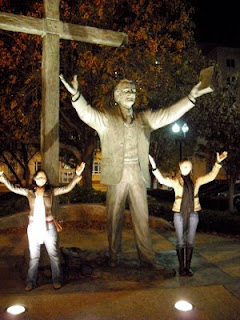 The next morning, being Sunday, I headed on over to the Cathedral in town to see how Episcopalians in Nashvile do their worship. Nice service overall, though it was kind of jarring to hear everything spoken, rather than sung. After that, we watched all the sad Titans' fans crossing the bridge downtown. 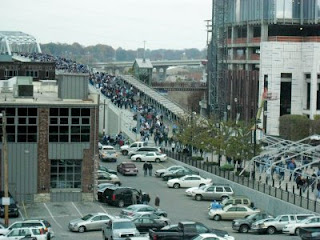 And then it was time to set up for our evening gig, which we did.

We played in the ballroom at the Rennaisance Hotel, for the 3rd late-night concert of the 3rd of 3 National Youthworkers Conventions, hosted by our friends at Youth Specialties. A surprising number of people came over, and we had a really fun time. Wish we could've played longer.

But, since we didn't, that meant we could still go out for my birthday, which we did. Stopped in several places on Broadway in Nashvile and listened to a variety of very interesting bands. My favorite was the 3-piece Rockabilly band with stand-up bass and only one guy in the band. Really fun, and lacking the boys-only overkill we all have come to expect these days. (You can tell it's a Rockabilly band by the big guitar the guy is playing.) 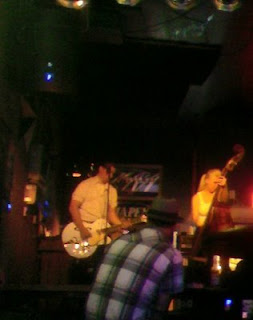 With the Jets' win, we ran into several people (or, they ran into us) who had been celebrating since the game ended. Usually this was as they were being escorted out of places.

With the celebrating over, we slept for a couple hours, then headed for the airport in the morning. I flew to NYC, where Justin picked me up and we headed for the second practice of the Life Church band. Michael flew home to make a Thanksgiving Dinner that couldn't be beat.

And speaking of that, we want to say Happy Thanksgiving to you all. As our little gift to you, we send you our rapping pilgrim turkey greetings, right here.

The Germans Call it Schnee

So, I began this weekend by leaving my apartment on Friday just before God gets up, and walking to the subway, which I took to the bus, which I took to the Newark Airport, where I got a pilot to take me to Chicago, where I met a nice guy who drove me out to a parking lot, where I got in the van and drove it to the Quad Cities where I picked up Michael and we drove to Marion, IA. You know, just a little commute to work. 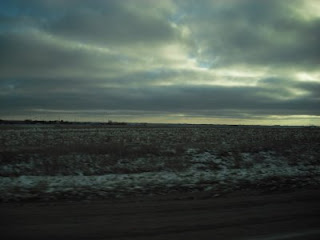 An interesting thing about Iowa is, the crop of snow they planted in the spring is just starting to come up, as you can see in that photo. I guess it's that time of year. Another interesting thing about Iowa is that they change their motto on occasion. (Wait, I guess it's the slogan they change; the motto is much more threatening sounding.) So the slogan used to be, "Iowa: You Make Me Smile." But I think they were concerned that the last word sounded too close to "laugh." So they had a contest, and people could make suggestions for Iowa's motto. They ended up choosing, "Fields of Opportunity." But I think they should have chosen, "Embrace The Corn." Because, if you think about it, from an evolutionary perspective, corn has done very well for itself. Corn has thousands of people working for its survival. People who spend all day, every day, thinking about corn. You cannot beat corn; so you might as well embrace it.

Okay, where was I? Oh yes, Iowa (Embrace The Corn). So, we played in Marion, (ETC), which made for a fine concert in a really nice room. Oh the weather outside was frightful, but the concert was so . . . uh, fine, thanks. When we were done, we had to race on off into the dark of Iowa (ETC) because we needed to stay in Decorah in order to get all set up for the morning at Luther College, which--not surprisingly--is a Lutheran College, in Iowa (ETC).

As you can see by the picture, my school's mascot is really rubbing off on me. Some people swear that I am starting to really look like a penguin. Perhaps I should've gone to Virginia after all. 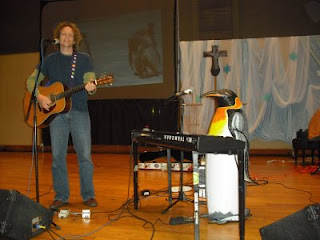 We had a great time at Luther. Played several times throughout the day, and did a couple of workshops where we talked about our bike trip. In the evening we played a concert, and folks from around Iowa (ETC) came over. However, one of the obvious highlights for us was meeting Miss Waseca, of Minnesota. 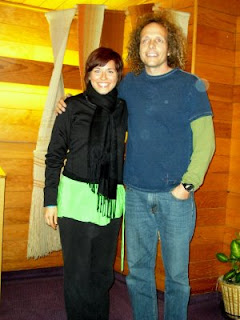 In the morning, we played some songs at worship, and then raced across Iowa (ETC) to barely make it in time to play in Sioux City. However, our time in Sioux City was awesome as can be, and they gave us gift bags with great snacks to help us make it through the night. Though we would have loved to hang around for the afterglow, we had to race back across Iowa (ETC) to get to Minneapolis in order to check into a hotel. With a 7am flight, I decided sleeping was pointless, but it sure was nice to sit in a hotel room for three hours.

So, I flew home, and Michael flew home, and that was pretty much what happened this weekend. And in closing, just thought you'd like to see the kind of thing that happens when you think of the piano as a percussion instrument, which I was always told it was. 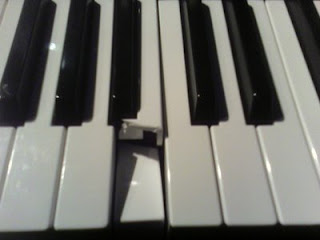 Welcome to my nightmare. I think you're gonna like it. Wait, that's Alice Cooper. (Fun fact: he's a republican!) What I meant to say was, welcome to my weblog. I think I'm gonna like it. Okay, so I'll jump right in. I began the weekend by driving the van from LawnGuyLand to North Carolina, where I picked up Michael at the airport.

We headed to Kernersville, a small town with a lot of McCain lawn signs. (As Colbert has observed, if we take our polls by lawn signs, we'd better prepare for President Remax.) Had a great time with a small group of folks at an all-day event, and took time out to chat with the people waiting in line at the library in order to cast their early ballots. After the evening concert, we drove off down the road a bit.

The next day, we drove 400 miles north through a series of calendars, jigsaw puzzles, and Successories posters.

Eventually, we arrived in Pittsburgh, where my daughter is sure her future husband plays hockey. We were in the Steel City to play at the second of the three National Youthworker Conventions, put on by our friends at Youth Specialties. Had a great time, played a late-night concert, and headed for the airport a little before 5am.

Michael continued on to Chicago, somehow staying awake, and I made it back to Manhattan, where I now sit in class, listening carefully to a lecture on Teresa of Avila.
Posted by Lost And Found at 10:44 AM 9 comments: