So, starting April 4th, Michael celebrated his first anniversary, our Lord rose from the grave, and the Yankees won two out of three against that other team: all was right in the world.

Having accomplished all that, Michael flew to Chicago, and I picked him up at Midway. From there we drove to Rockford, IL, where we had a very fine concert with some very fine peeps. From there, Gurnee, IL was next, and we felt fine afterward.

After that, we WauseOn'd in Oh-io, then drove to MadisOn after the concert. The next day, we stopped off in Reedsburg, WI to play at a school, and continued on to The Metroplex.

In the morning we played a high school, in the afternoon a K-8 school, and in the evening, a concert in a town called Fairbault. At the second school, our friend Joe was showing off the latest Metroplex accessory. 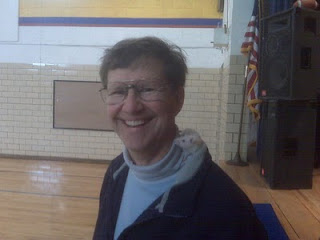 It seems that all the cool kids are doing it.

The next day we slept in a bit, and drove on up to St. Cloud, where we were reunited with our long-time friend, Jayne 1. Before the concert, she showed us around her church, and Michael enjoyed a large cup of coffee. 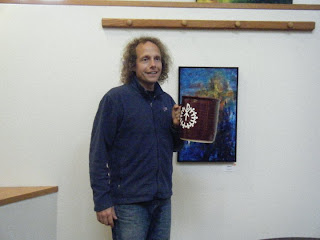 It seems all the cool kids are drinking it.

Anyway, they took us out to a fine differ afterward, and then we drove back to the Metroplex. On the way that night, we saw a most amazing sight, a glowing green light, a meteorite! Apparently, there were no injuries or damage, but there were widespread reports of bad poetry outbreaks.

The next day we both flew home, Michael to his coastal state, and I to my midwestern one, where I celebrated tax day by taking in a rowdy Ben Folds concert downtown.