So, while still within the Octave of Geneva, we headed off to parts east. I drove the van across Pennsylvania (zzzzz) and Michael flew to NYC. We met up at the Life Church, where I used to provide music on Thursdays, and where Lost And Found provided music on this particular Friday. Not a huge turnout, but a huge amount of fun for us. We played lots of songs from the new album, several for the first time.

The next day we drove over to Muhlenberg College in Pennsylvania, and then drove back to Long Island until the next morning when we headed to the airport to fly to Los Angeles, so I could meet Geneva. Well, I guess that's not why we went, but it was definitely a highlight for me, if not for her. Then at night we played the first of three National Youthworker Conventions, hosted by our friends at Youth Specialties.

Michael flew back to NYC the next weekend and got the van, then met me in Baltimore. We played a couple of concerts at Ft. Lee Army base, which were great fun, and quite an honor to do. (And, in passing, if your band is looking for roadies, you cannot do better than playing on a military base. Among the many talents of the enlisted men and women is loading a vanload of sound equipment in approximately 30 seconds!) As you can see in the photo, a picnic of soldiers looks a little different than your family gathering. 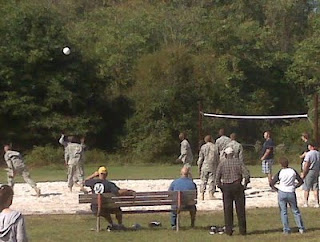 After being discharged from the base, we headed north to play once more with our friends Agape and Rachel Kurtz, this time in Gettysburg. The world will little note nor long remember our concert there, but we had great fun in a packed house. Er, chapel, I mean.

From there, we went to my house, and Michael flew home. A few days later, we joined up with Agape and Rachel in Lansing, Michigan [come on, let's Michigan, like we did last summer . . .]. Actually, I got there just fine, but Michael's flight through the night (commonly called a "red-eye") was seriously delayed, causing him to miss connections, etc etc. Eventually, he walked in just about exactly in time for us to play our part in the night's lineup. Phew.

The next night we played in huge room with a great sound-system crew in Kenosha, Wisconsin at Carthage College. From there, we all raced westward so we could play in Decorah, Iowa, at Luther College. Had another great time in a great auditorium, and all headed home, and this particular band took a weekend off. The End.
Posted by Lost And Found at 10:57 AM No comments: