Our final two performances as Lost And Found will be streamed online, on Tuesday, December 29th, at 4pm and 7pm Eastern time.  Both shows will consist entirely of songs chosen by The People (That's You!), using a system of "notes," as explained below.  For each show, the ten songs that accrue the most "notes" from listeners will be the set list.  All requests, all night. 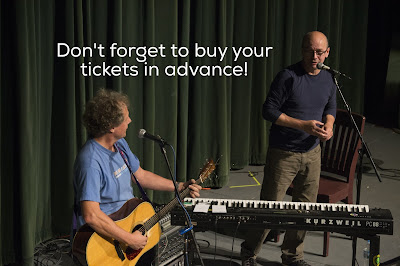 The shows will be hosted by Stage It, an online platform that allows listeners to watch live concerts online by purchasing a ticket using "notes," which cost 10 cents each.  This way, for a small price, the technical details of streaming and chatting are handled by professionals.  Listeners can "tip" the band using notes to show support, and so that the band gets paid for the concert.

And now, of course, you want to know how to make your request, right?

STEP TWO:  Your ticket to the show entitles you to request one song.  And your 100 notes go toward that requested song (just as everyone else's 100 notes go toward their request).  Once you've purchased your ticket, you'll have access to the conversation stream at the show(s) you're attending (4pm and 7pm Eastern time).  Simply post your request in the conversation stream on the right side, and your 100 notes will be added to the tally for the song you choose.

STEP THREE:  You can ramp up your song's total notes with tips at whichever show you requested it, right up until midnight (Eastern time) on Boxing Day (December 26th).  You can add notes to your request simply by tipping at either the Early Show or the Later Show.  (We track your total notes along with your request as we go, and will add up the total votes for each song on December 27th.)  Every note counts as one vote, and the top 10 requests at each show will be played at that show.  (I'm thinking we might need to open up our Lost And Found songbooks on December 27th!)

If you have questions, drop me an e-mail at george@speedwood.com.  If you already bought a ticket, we will be in touch to get your request.  Remember, you have until midnight December 26th to get in your request and extra votes for your song.  Good luck, and, happy voting!

See you on December 29th!