STOP ME IF YOU’VE HEARD THIS ONE

· The powerful (of Church and State) abuse power

· Brave young people put their lives on the line for freedom

This morning’s New York Times? Yes. But no.

“All of these events came together in one place and time 500 years ago. Some would say the Medieval Era ended and the Modern Era began when one solitary monk put his life on the line and uttered his historic words: ‘Here I Stand',” said Dr. Rich Melheim, whose graphic novel on the life of Martin Luther will be featured at Comic-Con when Melheim is on stage in at the acclaimed convention next week in San Diego.

“Hollywood loves a flawed hero,” says Melheim. “Our dear Dr. Luther is simultaneously brilliant, bold and flawed, flawed, flawed. But once you get to know his demons, his struggles, his story and its profound impact on human rights and history, you can’t help but marvel at the guy… if not love him.

“Oh. And unlike the Puritans and Calvinists his movement helped spawn, he really loved his beer.” 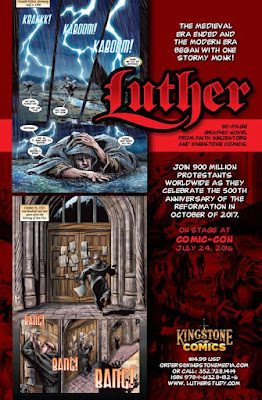 “Everything from the defeat of the Spanish Armada, to the Pilgrims voyage to Plymouth Rock, to the settling of Jamestown Colony, to the writing of the Bill of Rights, to the founding of a Puritan Seminary called Harvard in 1636, to the end of slavery in England, to Lincoln’s stubborn determination to win the Civil War and free the slaves - - heck, even Gandhi’s ability to sway the conscience of the British Parliament and Martin Luther King, Jr.’s movement - - all of these were seeded and preceded by an event that took place on October 31, 1517 when Luther ‘nailed it',” says Melheim.

Melheim adds, “Without Luther’s death-defying stand for an individual’s conscience, there would be no nation states in Europe as we know them today. No original 13 Colonies in North America. No British Empire. No Harvard. No Yale. No Princeton. No Louisiana Purchase. No Lewis and Clark. Maybe not even schools teaching slaves and girls to read. As an educational innovator, Dr. Luther supported schools where both boys and girls could learn to read the Bible. Centuries later on it was Lutherans and other early Protestants who broke the laws and taught slaves to read. Where do you think Martin Luther King, Sr. got his name? From Aristotle on it was assumed slaves and women had no souls, so teaching them to read was a waste of time.”

The Graphic Novel Luther will be a useful tool for those who like to learn about the life and times of Luther and think about the implications and continuation of the Reformation he ignited. According to the press release for the novel in advance of Comic-Con, the story “begins in 1415 with Czech Reformer Jan Hus burning at the stake and predicting Luther’s rise 100 years later. It runs to and through the trials and trails of a restless young monk - a brilliant but flawed hero - who searched for peace at 21 by locking himself away from temptation in a monastery. As a monk Luther wrestled with God, experienced a spiritual awakening, and was condemned by the church for questioning the sale of indulgences (certificates guaranteeing forgiveness of sins). Luther - whose name means “freedom” in Greek - went to trial but wouldn’t back down, even in the face of near-certain arrest and death. In the end, he set the stage for a world where freedom of conscience, freedom of speech, and freedom from abuse by government would be core values. That one solitary monk became an annoyance, then an outlaw, then the voice of conscience and reason for the entire Western World.”

Come on and get a close-up view of the Reformation, of Luther, and the key players who changed the trajectory of Western Civilization. Open the door to history and to lifetime memories by joining us in 2017 at the place where it all began, Wittenberg, Germany.  Visit Luther500.com today!
Posted by Lost And Found at 1:33 PM No comments: